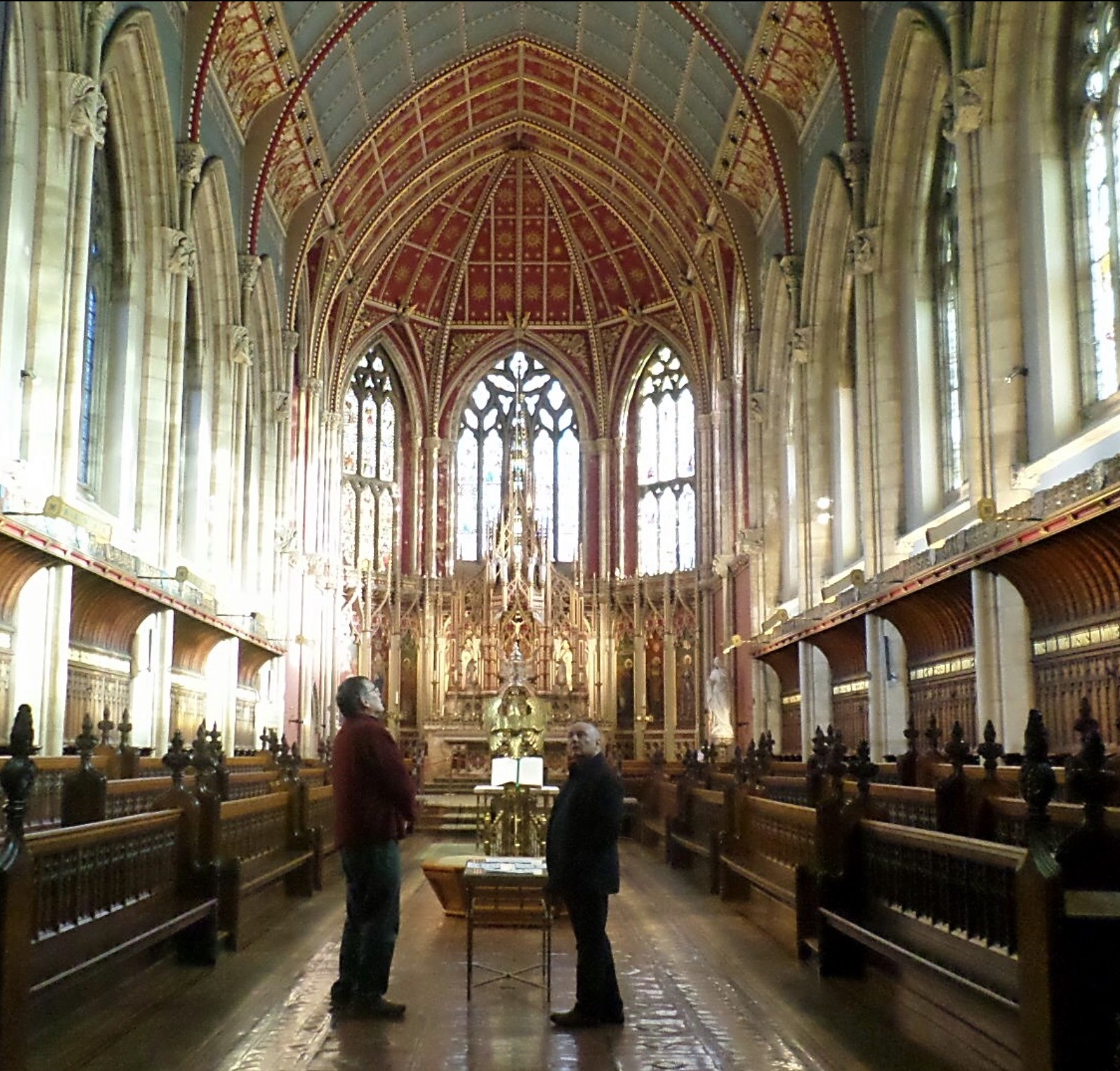 A great discovery just outside Durham - Ushaw College! It’s a relatively new tourist attraction in the north east with entry fee a modest £3. Here I am with Brian my brother-in-law inside the main Chapel first completed by Augustus Pugin in 1847 then enlarged in 1879 to fit 350 to serve the burgeoning Roman Catholic community and its need for priests. Since 2011 Ushaw has been without trainee priests but it remains open for worship and for visitors like ourselves. 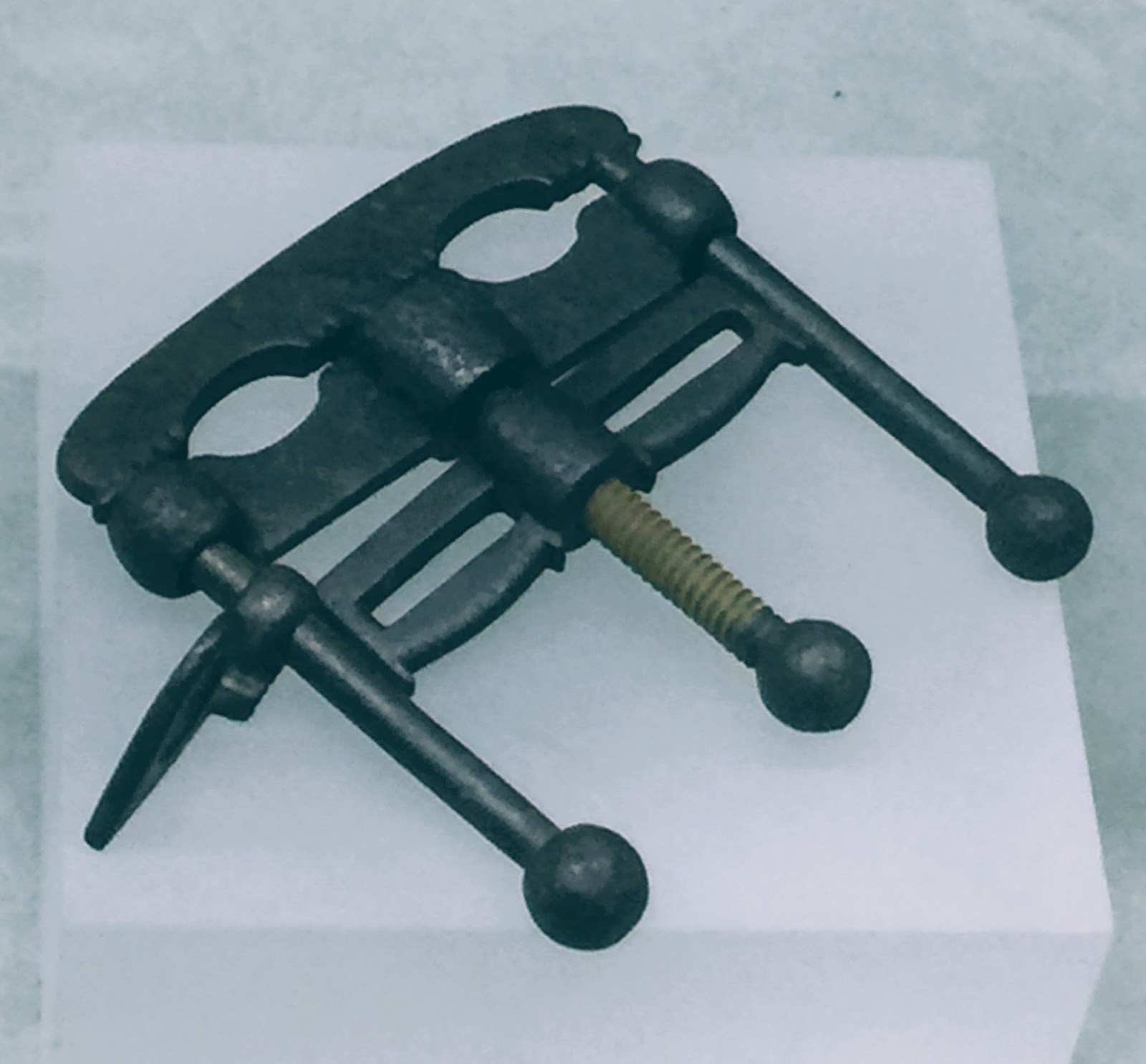 I’ve never seen a thumbscrew before! Here in a display cabinet at Ushaw College in County Durham is a reminder of cruelty associated with the demands of religion in this case my own religion, the Church of England. From 1559 until almost 1800 it was treason for a Roman Catholic priest to enter the country. The forfeit beyond thumbscrew torture was execution by being hung, cut down whilst still alive, your intestines dawn out and your body cut into quarters. 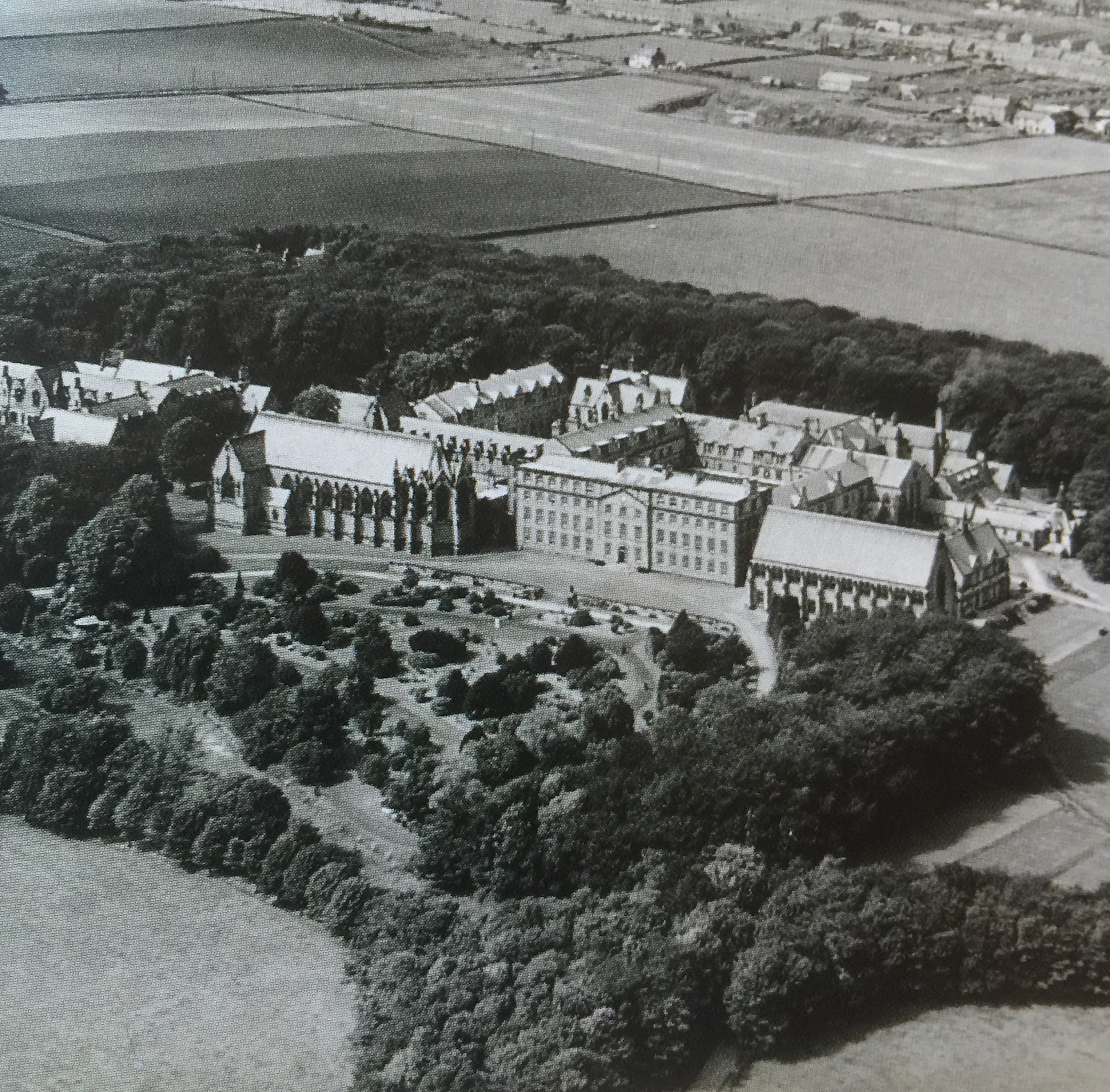 Ushaw College, Durham in the 1950s seen from the air. The College founded in 1808 was a part transfer from Douai College in Flanders where Roman Catholic priests trained for ministry among the underground RC community in England. The other part of Douai went south to Hertfordshire. Ironically it was the French Revolution that contributed to loosening anti-RC legislation since France confiscated all British property including Douai whose students were allowed home. 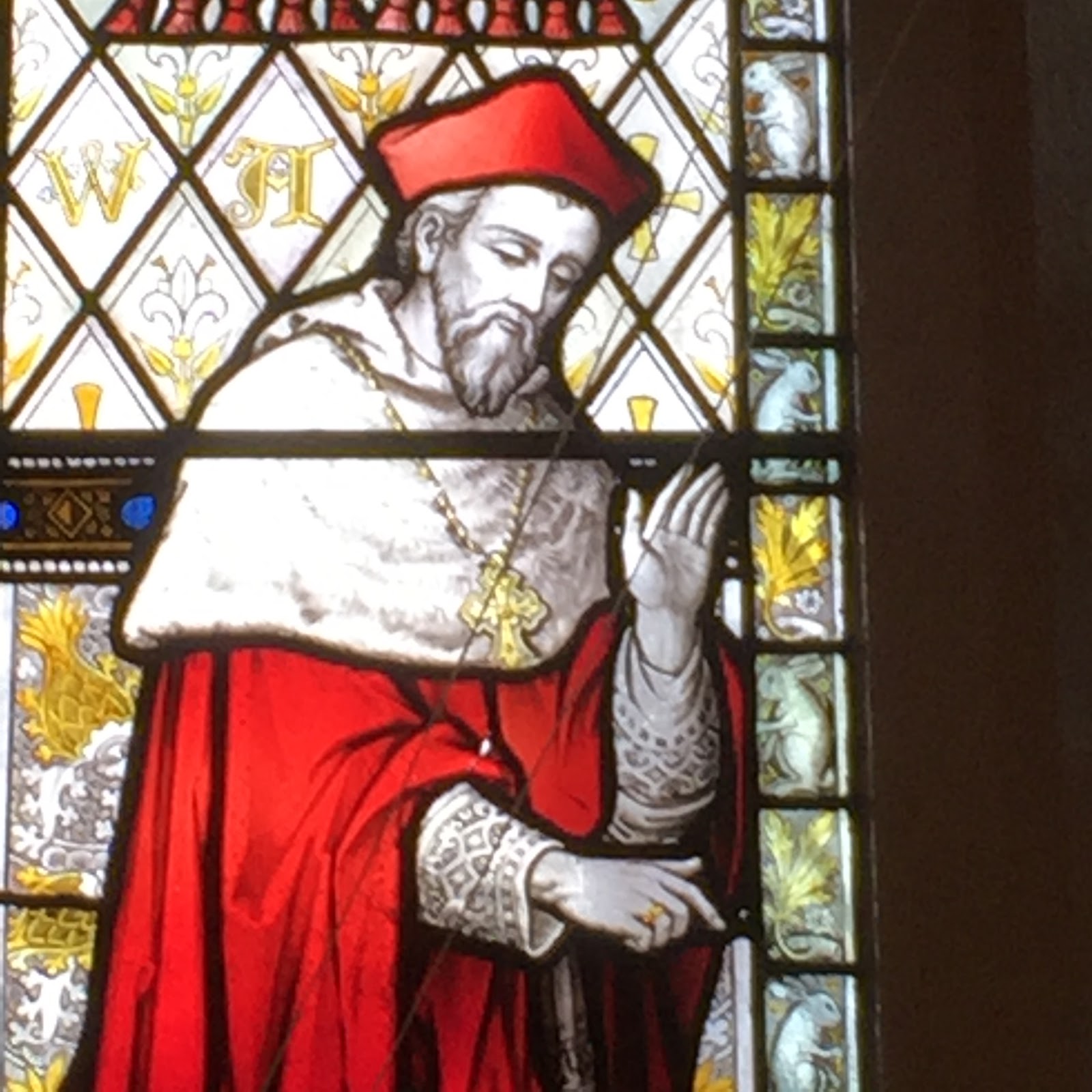 Cardinal William Allen (1531-94) looking down from the Refectory window at Ushaw College in Durham is a Marmite figure in English history. As Canon of York Minster he refused to swear allegiance to Henry VIII convinced many were being forced into Protestantism against their will. Allen fled abroad opening Douai seminary in Flanders ruled then from Spain and was instrumental in attaining the Pope’s excommunication of Queen Elizabeth. He helped plan the Spanish Armada (1588) and would have become Archbishop of Canterbury if it had succeeded! 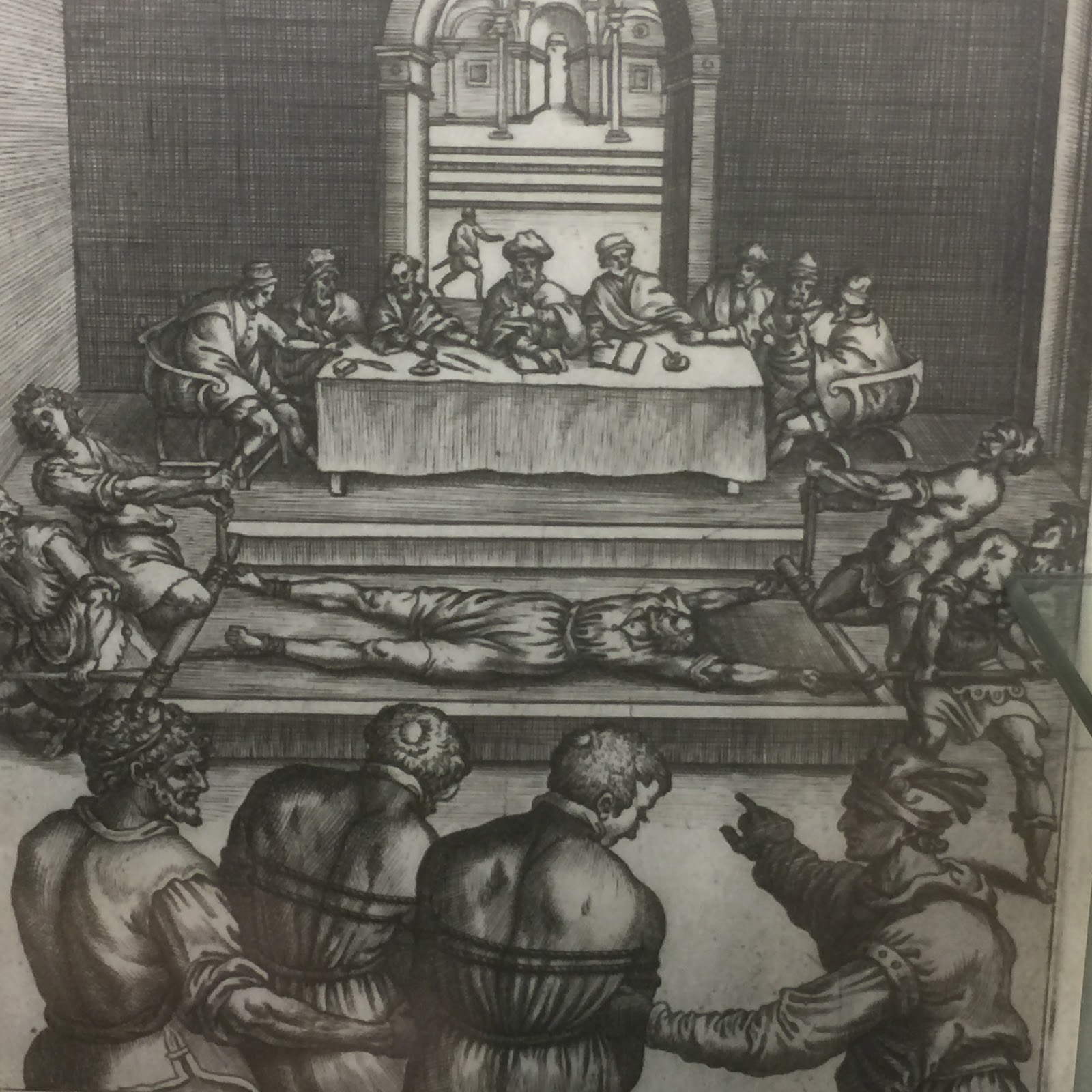 My links with Edmund Campion SJ were renewed on my visit to Ushaw College where I viewed this engraving of  his torture on the rack. Like me Campion attended St John’s College in Oxford from where he fled to Douai. In 1970 our Church historian President Richard Southern invited the Jesuits to say Mass in Chapel on the day Campion was canonised in Rome and I attended. Southern preached on welcoming Campion home reciprocated later by a warm greeting from Pope Paul VI. 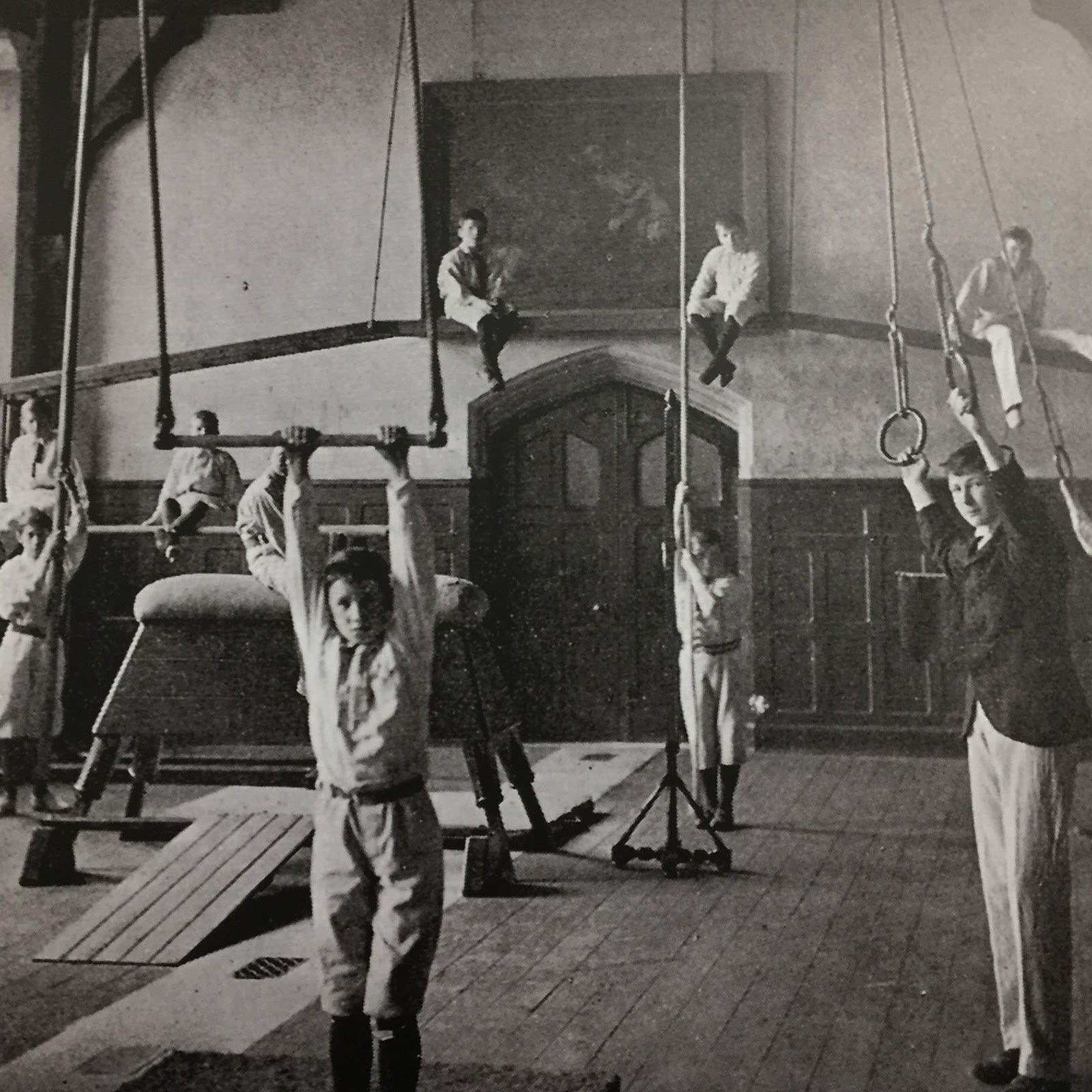 Muscular Christianity exhibited in the gym at Ushaw College! For almost 200 years it operated as a Roman Catholic institution at different levels, a seminary, a boarding school and quasi-university. Until the late 19th century RC men did not attend university partly due to the need to belong to the Church of England for admission. The mixing of ordinands with other men was somewhat radical at that period though an inevitable consequence of the marginalisation of RCs in English society. 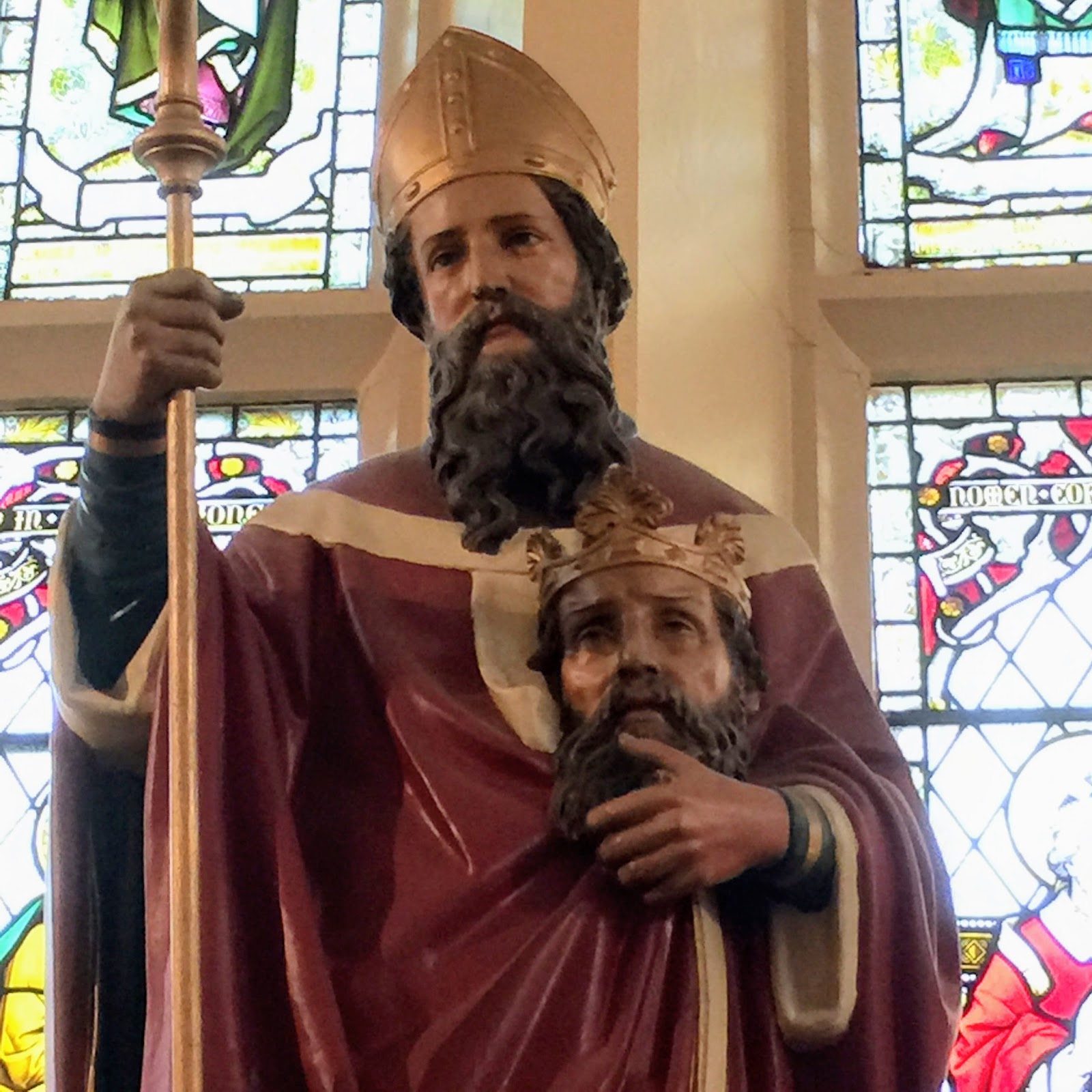 ‘Whose head is that saint holding?’ my sister-in-law asked as we encountered repeated images of the same touring Ushaw College outside Durham. There’s no direct connection between St Cuthbert (d687) and St Oswald (d642). It came when Oswald’s head got reburied with Cuthbert in Durham Cathedral. This  brought devotion to the two together as devotion to St Peter and St. Paul come together in Rome. The spread of Christianity in the north of England owes much to both hence their patronage of Ushaw. 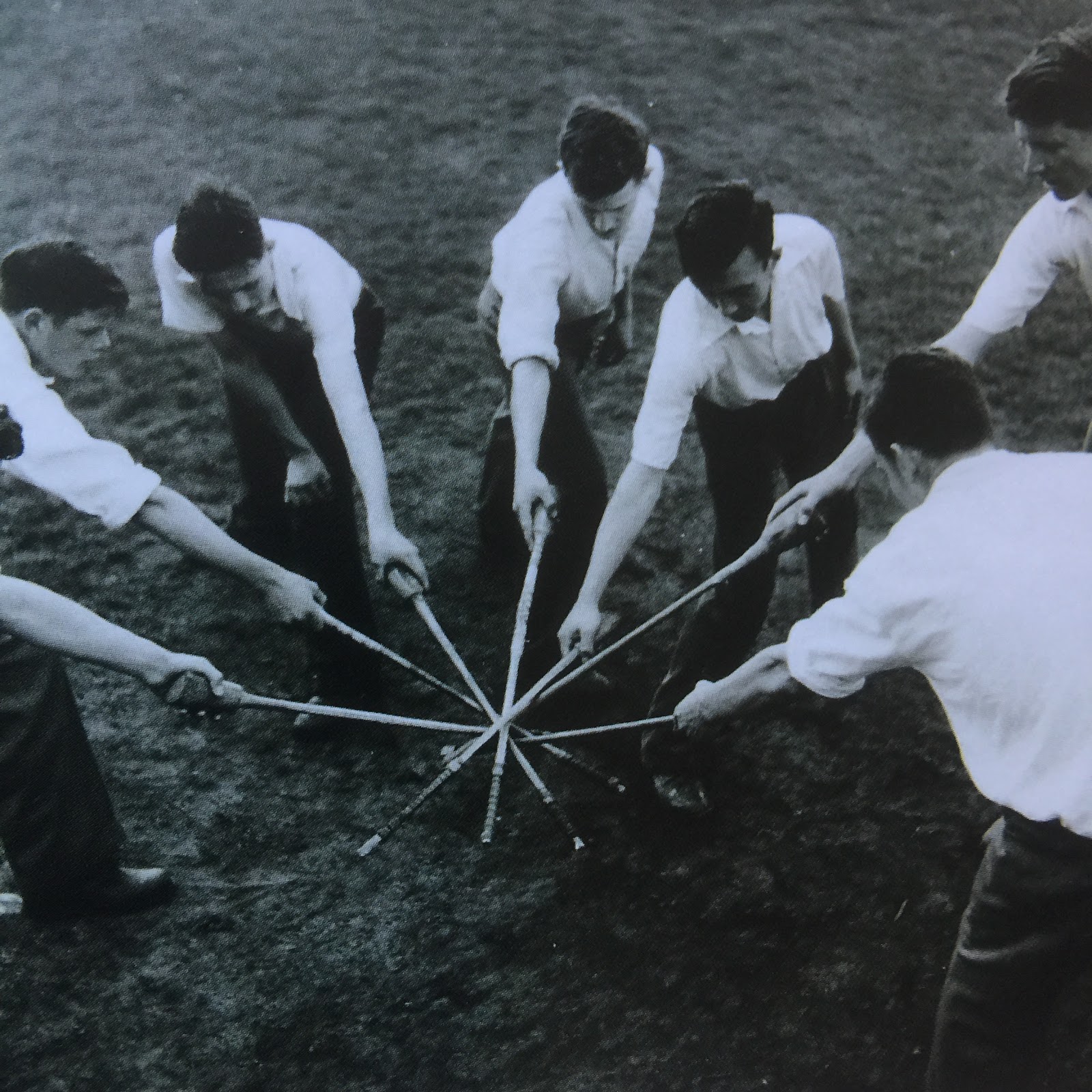 Ever seen a game like this? It’s called ‘cat’ and was played at Ushaw College near Durham by priests in training and other youths. The game came from Ushaw’s former home at Douai in France. ‘Cat’ may be short for the French ‘quatorze’ or fourteen. Two teams of seven played a version of rounders round a circle. To provide all-round education boys at this seminary, boarding school and quasi-university took subjects like fencing and dancing alongside music and art. 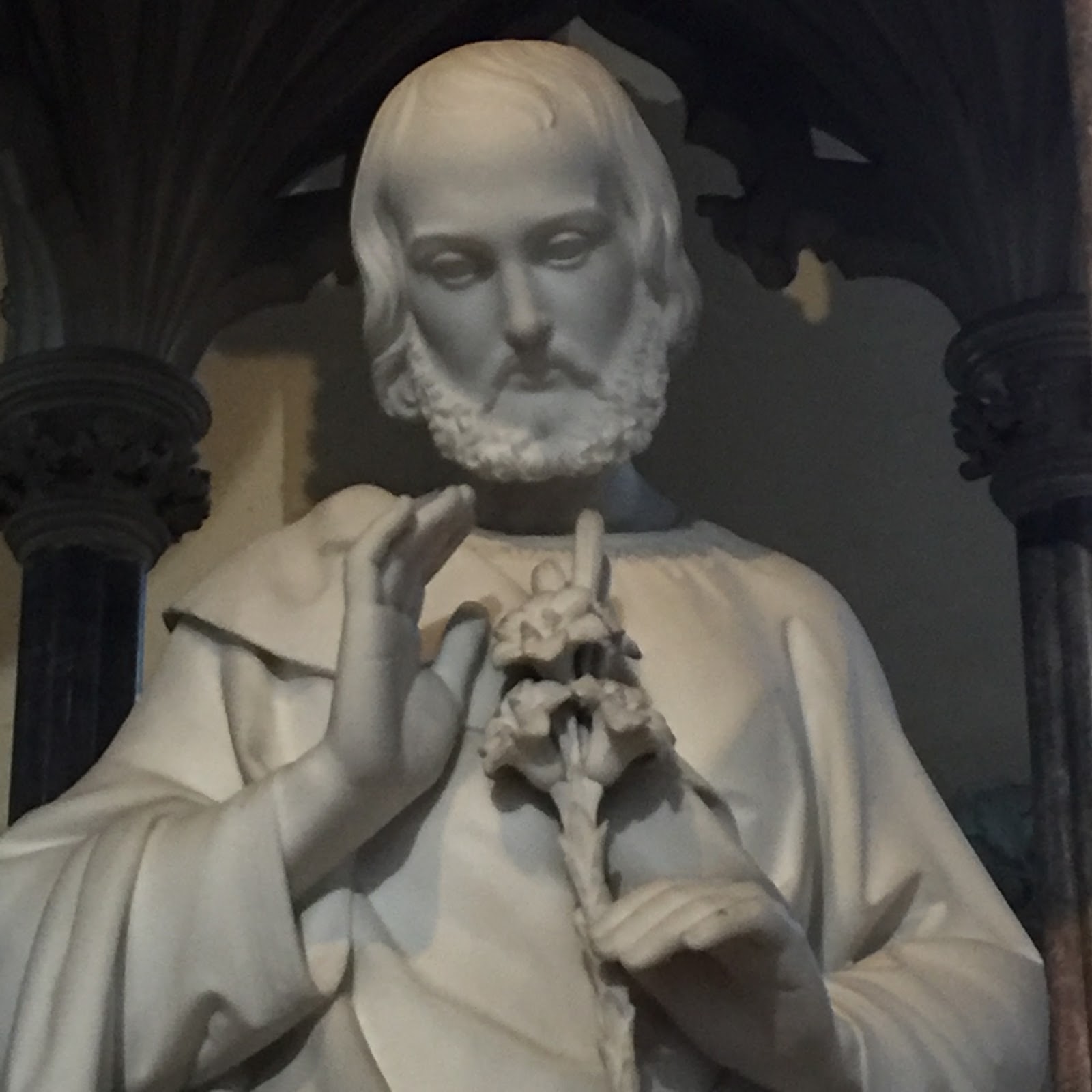 This Carrara marble statue of St Joseph has looked down on trainee priests at Ushaw since 1853. Stationed in the second largest Chapel it matches Carrara’s Our Lady of Clemency that looks down the main Chapel. As protector of the Holy Family Joseph is a role model for priests called to lead and protect the Church. Pope Francis has special devotion to this saint in consequence of which his prayers are now requested at every Roman Catholic Mass. Priests ascending the altar at Ushaw College are reminder of its historic role in English Roman Catholicism. Today there is less worship - one Mass a week - since priestly training moved from here in 2011 yet the splendid College buildings, its art and artefacts, draw thousands of tourists and pilgrims. Ushaw remains as a visitor attraction, conference centre, events venue and business hub in which the RC Church partners academic and business agencies in and around Durham.

Canon John Twisleton
I'm a Sussex based priest, ideas and people person, author and broadcaster. My interests include helping people find peace and touch base with mainstream Christian believing. I have published research about the historic Twisleton family and have friends in Guyana, South America where I used to serve as Theological College Principal and am a Canon of the Cathedral.